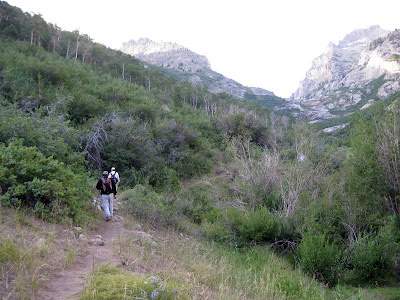 It's been a few years since I've climbed Mt. Gilbert, and I have to wonder why. What a great climb - stellar views, an impressive-looking peak, all kinds of wildlife... even a good trail that gets you a lot of the way there. What more could a girl ask for?

My friends Bruce and Jeff suggested the trip a couple of weeks ago, and I'm darned glad they did. That said, our day turned into a bit more of an adventure than we'd anticipated - nothing we couldn't deal with, but we ended up back at the truck about seven hours late. Yes, folks, once again I ventured into Seitz Canyon, and once again I ventured into a lightning storm. So far, Seitz and I are batting .1000 for storms.

In the past, when we've climbed Gilbert, we've done so from the Scout Camp, downclimbing our up route back to the truck. One of our number had had recent back surgery, though, and between that and the storm rolling in we opted to downclimb into Seitz Canyon in order to get below timberline more quickly, to avoid slippery rain-soaked rocks, and to avail ourselves of the trail to walk out. As luck would have it, we ended up pinned down by lightning several times, squandering a few hours of daylight we could have used walking out. The good news is that we had a great time, got out safely, and had cold beer and dinner waiting for us when we got home.

Gilbert clearly doesn't get climbed very often - the old cairn and register had been removed since I was last there in 2007, and the new register placed in 2008 had only three entries besides ours. Gilbert looks a little daunting from the road, I guess, but it's such a fun climb and so readily accessible you'd think more people would venture up there. It's a super ski destination in the spring when conditions are safe. It's a darned fun - if not much visited - summer climb, as well. 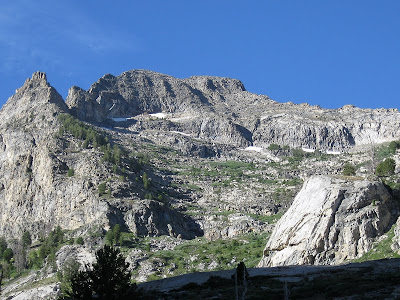 Gilbert's obviously an off-trail route, which provides an opportunity to talk briefly about off-trail hiking. If you're reading this blog, this is likely old hat to you, but hopefully this will remind you to share this information with your less-experienced climbing partners.

As off-trail hikers, it's our responsibility to minimize our impact on the mountains we're visiting. As rugged as they seem, the mountains are in actuality very fragile, and it's astonishingly easy for us to create significant ecological damage through careless travel habits. It should go without saying - if you pack it in, pack it out and, what's more, pack out the other idiot's garbage, too. A little less obvious, though, is route selection.

Choose a walking surface that minimizes the potential damage done by your footsteps. The best walking surface for this purpose is - SNOW! Walk on it all you like, you aren't going to hurt anything. It's just going to melt away and leave the plants and soils underneath unimpacted.

If there isn't a handy snowfield you can use, your next best bet is ROCK. Lamoille Canyon is full of conveniently-placed rock rims, boulders, and torso-sized stones, and they make great walking surfaces. Often times you can pick your way through plant areas by stepping rock-to-rock. It usually provides great traction, too. Bonus.

If you can't find rocks where you want/need to go, opt for dirt. This will require some care on your part to avoid causing damage, but it can be done. Look for game trails - they abound, and they're obviously already impacted.

Your last option should be stepping on plants. There aren't a lot of places up the canyon where you can't find snow, rocks or dirt to walk on, but sometimes stepping on plants is necessary. I get it - just keep it to a minimum. 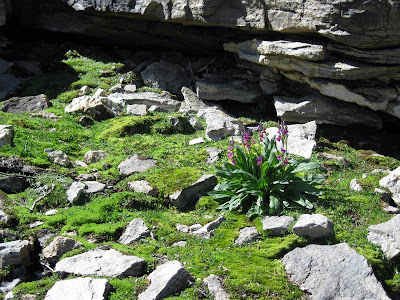 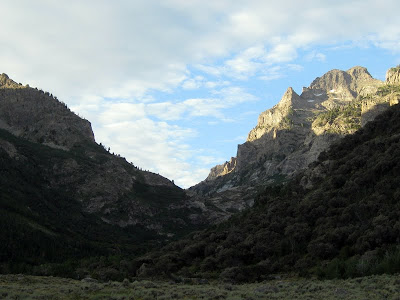 Mt. Gilbert is the impressive-looking peak that looms over the Lion's Club Campground nestled at the base of Right Fork Lamoille Canyon. It's a north aspect, meaning that it holds snow and (later) moisture until later in the summer than some destinations. If you're planning on a summer climb, I'd suggest August to snowfall as a good time to consider. That will give time for some of the small waterfalls to dry up, creating a very user-friendly set of staircases to use to avoid brush-bashing.

To get to the trailhead, drive up Lamoille Canyon Road, and turn off at the Lion's Club Campground road. There's a trailhead parking area at the Campground gate. Leave your vehicle there. The trail starts out up the road through the campground - sometimes the people who've rented the campground will get in your face and try to tell you that's not where the trail goes... just smile and show them the carsonite trail signs you're following. They're there.

The trail departs from the road at about the A-frames and makes its way upstream to a couple of small bridges. Cross the creek and follow the trail through a lush collection of aspens and raspberry patches to the top of a glacial bench, about 1.7 miles in. Leave the trail here, crossing the creek and heading through the brush to the base of Mt. Gilbert. 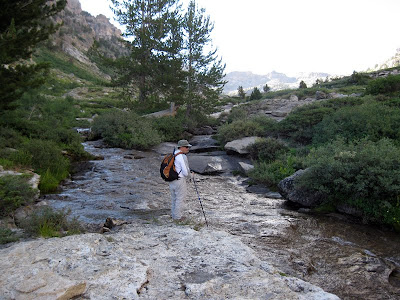 Keep to the left of the dish beneath the peak, and you'll find a small waterfall path that, by August, should be largely dry. This is a great way to make your way up. It's only steep in a couple of places, other than that it's like walking up a rock staircase. You'll eventually end up at a rock band, with a very climbable mini-chute towards the left. Climb up the chute and continue to make your way uphill along a series of rocky ramps. 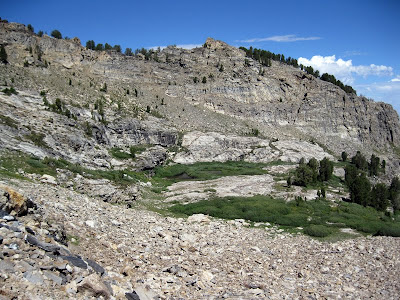 At about 9900', you'll reach a talus field on the east end of a glacial bench, with a lovely tarn off to your right. Start skirting right here, across the talus, beneath the obvious point, and climbing up to a series of rocky ramps and ledges. You're shooting for a spot just to the left of the lowest part of the ridge between Right Fork and Seitz Canyon. This is the crux of the route... there are a couple of places with some exposure here, where a fall would lead to significant consequences. However, there are some reasonable ledges and the hand and footholds are bomber, so it shouldn't create much whimpering. There isn't a trail, obviously, so you can choose whatever seems safest to you. 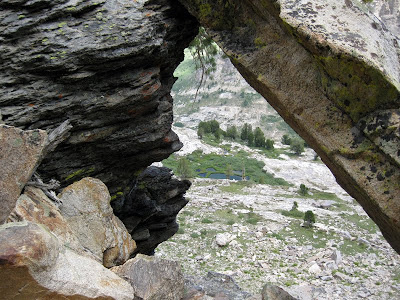 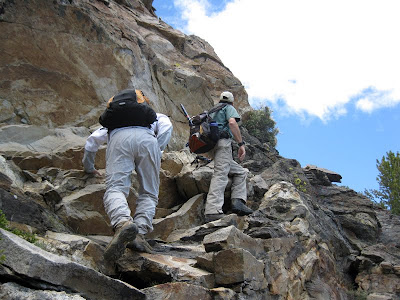 Once you gain the ridge, cross over to the other side - not only for easier walking, but also for spectacular views of Seitz Lake and Seitz Couloir, also known as the Come Line by skiers. Walk up beside the ridge until you reach the shoulder of the summit block - it's an obvious change in pitch. Cross over again and traverse across the face until you reach the obvious cleft between the main peak and the eastern sub-peak. 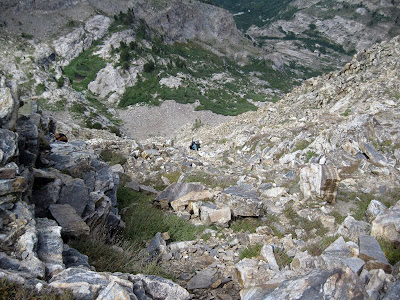 Here's where it really gets fun. This cleft is really wonderful Class 3 climbing, with solid holds up a steady pitch. There are lots of options here... once you gain the top you'll be greeted by spectacular views of a magnificent jagged ridge and a large summit cairn with a sparsely notated register. Enjoy. 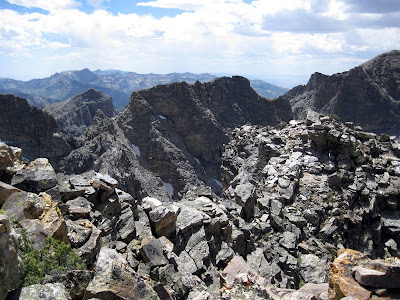 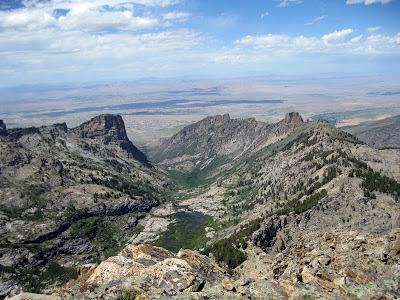 To exit, either downclimb your route or arrange a shuttle and exit via Seitz Canyon. If you leave via Seitz, be aware that there are a number of cliff faces you'll have to pick your way through. The easiest down routes to find are closer to the lake. 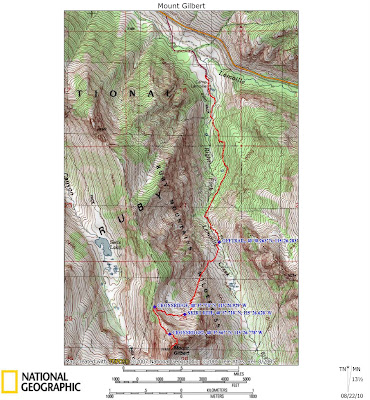 Topo - this would be more useful if Google Earth had a summer image, but they don't. Sorry. It at least gives you an idea of where the route goes. You'll note that it's a little bit off - the waypoints are on the ridge and the route is actually on the other side... it's a cliff face where it shows the route on this image. You get the idea, though... 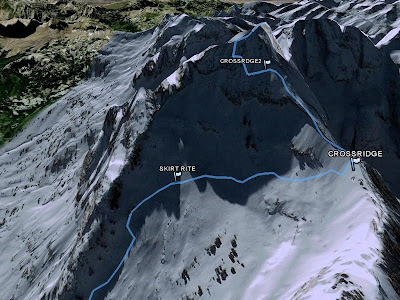 Look at the pretty pictures!

Save your eyes... click on the pictures to make them bigger!

Beta on some Ruby Mountain hikes

What the hell is she talking about?

Who is this gal, anyway?

mountaingirl1961
I'm a fourth-generation ranch kid who blew out of here after high school and, completely to my surprise, ended up back in my home town and running my family's ranch. I was afraid I'd spend my life in a yuppie ghetto. Lucky for me I escaped! Now I'm firmly established here in Paradise and loving life, following my passions repeatedly into the most beautiful mountains in the world.